Lent Lunches were originally planned for March 4th and 18th.  The first took place and was well supported, but sadly the second had to be cancelled due to the Corona Virus outbreak.  Here are the four ‘chefs’ enjoying their soup and roll at the end of the session. 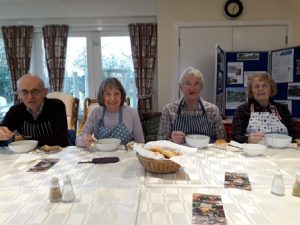 The proceeds from this year’s Lent Lunch will be shared equally between Churches Together Shepton Mallet and St Peter’s Lifeline, a charity we support in Kenya.  We were delighted to welcome David Baldwin, founder of St Peter’s Lifeline, who came along to support us and to give us a wonderful insight into the work being done in Kenya for children and disadvantaged people. 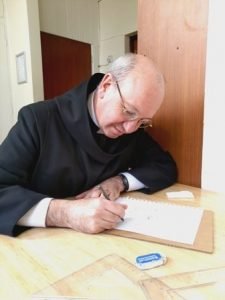 During Advent 2019 one of our parishioners devised a novel way for us to help each other and raise funds at the same time.  She held a special Draw with 12 prizes which were drawn on two consecutive Sundays in Advent.  The prizes were mostly pledges rather than material goods such as offers of gardening, baking, prayers, housework.  One particular pledge was “Teach someone to Draw”, and it was won by none other than Fr Bede himself.  Artist Tia has now spent three sessions with Fr Bede and a new skill has been acquired. Very well done to them both.

In early September St Michael’s took a stall at the annual Evercreech Show with a Tombola where every number won a prize.  Despite a rather cool and breezy day, the crowds came and the stall proved very popular, raising over £200 for parish funds.  Thank you to the four parishioners who manned the stall, and to everyone who supported it in any way. 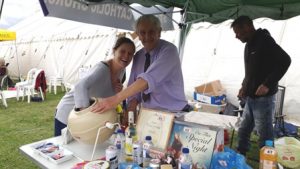